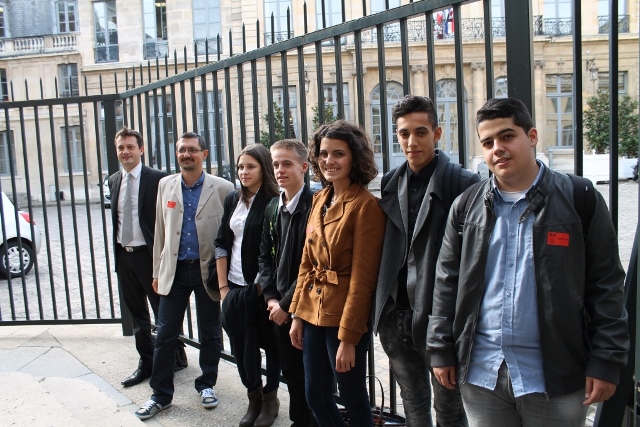 This is a national umbrella project which enables partners in specific projects to fund a variety of initiatives. A Cordée de la Réussite (CdlR) is a partnership between one or several HEIs and high schools aiming at promoting equity of access and completion of students in first and second year of Higher Education.

This is a national umbrella project which enables partners in specific projects to fund a variety of initiatives. A Cordée de la Réussite (CdlR) is a partnership between one or several HEIs and high schools [lycée, collège] aiming at promoting equity of access [égalité des chances] and completion of students in first and second year of Higher Education.
The partnership develops specific actions (e.g. mentoring, academic tutoring, cultural tutoring, help for accommodation, financial support, and general preparedness for entry into Higher Education) to create ‘solidarity networks’ between different levels of education (secondary and higher education).
The CdlR is a label given to (as of 2008) 100 initiatives in France.
Coordinated action from the Education Ministry (both Secondary Education and Higher Education) and the Ministry for Cities, (see http://www.ville.gouv.fr/?education,232 in French) including the Dynamique Espoir Banlieues [Hope for Banlieues Initiative].
Targets all young people potentially, but emphasis given to young people in underachieving school districts (among which French banlieues).

For the Academy of Lyon:
Climbing Ropes for Success have intended to introduce greater social equity in access to the "educational excellence", to fight against the territorial, cultural and psychological barriers that lead young people from disadvantaged backgrounds to leave their studies, and in order to support them in continuing their educational paths.

The Climbing Ropes were launched in Lyon on November 18, 2008 by the Minister of Higher Education and Research and by the Secretary of State in charge of urban policy.

The Ropes are based on a principle of solidarity between institutions and are part of a dynamic intensification of links between school education, higher education and the professional world.

Support local initiatives with a national label (CdlR), and funding (500,000 EUR in total for 2009 over 125 planned labels).
Implemented by Ministry for Higher Education, with support of Ministry for Cities.
Initiatives vary in scope and partnerships: industrial partners, local communities, etc. may be involved.

Projects include public and private institutions. Emphasis is given to person-centered learning and experience therefore groups involved tend to be “human”-sized.

The initiative was based on initial stock-taking of all projects concerned with increasing equity of access into Higher Education by the Education Ministry. Public demand and strong political support was provided for a unifying umbrella initiative to enhance the scope, outreach and funding of individual projects.

The goals of the French government are based on ET2020 goals:

The initiative was well received at its inception and is still funded today as it still meets the expectation of both Higher Education stakeholders and the general public.

Describe if the project ensured its sustainability

Sustainability is ensured through widespread public and political support.
Another factor is the multiplicity of co-funding from stakeholders (Ministry for Cities, Ministry of HE and Secondary Education, enterprises, local and regional authorities, individual HEIs). Regular regional- and national-level meetings provide assessment, best practices and co-ordination.

Each project is assessed according to indicators and procedures that are agreed upon between its promoters and its various stakeholders.
Participation of Secondary school students as well as procedures for co-funding are always taken into account.

Academic HE, Professional HE, Secondary Education