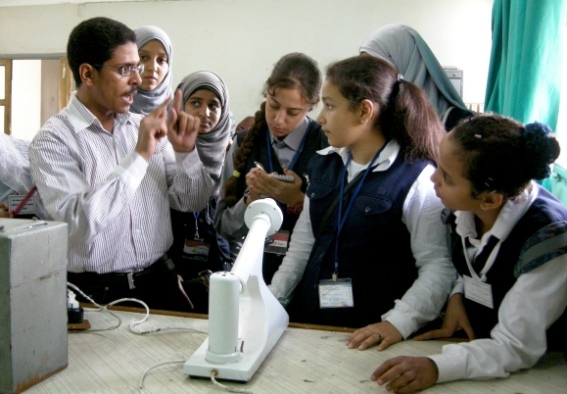 The project has the very ambitious goal to reach or at least contribute to gender equality in the Egyptian higher education sector, focusing in the staff level. A partnership between 5 Universities there was established, to exchange best practices as a first step. In the long run the project also might have an impact on the gender equality in society.

With these measures, the project aims at contributing to the transformation process at Egyptian universities and at adding an international perspective to gender and diversity discourses at Freie Universität Berlin.

The project was initiated by the Freie Universitet Berlin and joined together with several higher education institutions in Egypt, together with the Egyptian Ministry of Higher Education. The cooperation received support in funding by the DAAD -  The German Academic Exchange Service.

The main rationale behind is explained in these figures:
Percentage of female faculty members and students, 2009/10

As it is visible in the table, research on the gender balance in 4 specific universities in Egypt has shown high differences in enrolment of women in higher education. And while the ratio of students shows a gender balance, in 3 cases with higher percentage of female students, research has shown that these numbers speak much less in favour when it comes to female assistant professors, which for 2 universities are lower than 20 percent. When it comes to full-time professor level, differences grows further, with one university (South Valley University) having even less than 6 percent of female professors.

Looking at the whole context, it is clear that women account for about 35% of professors at the universities in Cairo and Alexandria, the universities thus having a higher percentage of female professors than most German universities. At the universities in Upper Egypt however, women – although being half of the students – remain under-represented on all levels of university staff. Furthermore most universities lack programs to balance academic career and family duties and to facilitate the integration of female graduates in the labor market. The involvement of four different Egyptian universities enables the establishment of a not only transnational but also inner-Egyptian dialogue on equal opportunities and gender justice.

The Freie Universitet Berlin has a long tradition of research in the field of gender equality, and through the previous cooperation with Egyptian Universities, and based on the data shown above, this was seen as a big problem in the country. Based on this issue, seen on the local and national level, institutions have joined forces in order to start the project addressing the gender equality in Egyptian higher education.

Furthermore most universities lack programs to balance academic career and family duties and to facilitate the integration of female graduates in the labor market. The involvement of four different Egyptian universities enables the establishment of a not only transnational but also inner-Egyptian dialogue on equal opportunities and gender justice.

At the universities in Upper Egypt, women are under-represented on all levels of university staff. Most universities lack programs to balance academic career and family duties and to facilitate the integration of female graduates in the labour market. The involvement of four different Egyptian universities enables the establishment of a not only transnational but also inner-Egyptian dialogue on equal opportunities and gender justice.

Project received from the beginning a strong support of the Egyptian Ministry of Higher Education, which was seen as crucial for project’s successful implementation. Such support has included both a smooth running of the project, ability of receiving necessary data, and opportunity to engage a large scale of stakeholders, which in the future could result in multiplying the outcomes and activities on other higher education institutions across Egypt.

As the project is funded by DAAD, a clear support by the German system is visible and ensures both financial support and expertise in this field.

Further on, the issue of gender balance is raising on its importance in Egypt, and this initiative has contributed to it. In this regard, the support of the Ministry is also very much important. Besides the general public, the most important is for the project to reach its main target group, female students, teaching staff, management of the institutions. The culture in Egypt still creates obstacles for women to pursue their careers and focus on them, which is seen as one of the biggest reasons for the gender inequality. With the developments in the society, this project has as well reached its higher visibility and support of the general public. One of the factors that have for sure affected the implementation of the project was the ‘Arab spring’.

Following the start of the project, the 4 Institutions linked to the project have developed as well their institutional strategy and have devoted their work to changing the current culture, in order to support more women pursuing their careers in the higher education sector

The first project phase served to exchange best practice examples and information on the situation regarding equal opportunity issues at the participating universities as well as to discuss objectives and measures of the project. In several meetings, the Egyptian project partners identified the promotion of a family-friendly environment at Egyptian universities and the enhancement of career opportunities for female university graduates and scientists as central topics.

As a milestone of the project, the Egyptian partners decided to establish offices concerned with the promotion of equal opportunities and a family-friendly environment at the Egyptian universities. These Equal Opportunity Centers are currently being set up at the partner universities. The family support center of Freie Universität Berlin and the central and departmental gender equality officers can serve as a model for the realization of the centres.

With its successful equality policies, Freie Universität Berlin is ranked at the forefront among all German universities. The university has earned the Total E-Quality Science Award (TEQ) for the fourth time in a row for its exemplary higher education and personnel policies, which embrace the principles of equal opportunity. In a nationwide ranking regarding equality at higher education institutions (CEWS), the university is once again ranked near the top. In 2007 and 2011, Freie Universität underwent audits for certification and recertification as a family-friendly higher education institution.

More about the Equal Opportunity Centres:

In June 2012 the Egyptian project teams started to establish Equal Opportunity Centres at their universities. The centers mainly aim at supporting all university members in achieving work-life balance and in career development. This includes counseling of young researchers and graduates, offering soft skills courses, and promoting a family friendly environment at the university.

The Egyptian partners drafted indivdual proposals on measures required at their universities. The dialogue between the Egyptian and German project members creates synergies, while at the same time taking regional differences into consideration.

The Universities of Alexandria, and Cairo are currently working on the establishment of similar offices which will start their work within the coming months. Meanwhile, all partner universities also aim at improving the availability of child care facilities on or close to the university campus.

The project is funded by the German Academic Exchange Service (DAAD) since April 2012. During the first project term, the project partners met for several workshops to analyse the current situation with regard to gender equality at the partner universities, to exchange best practice examples, and to identify specific objectives for the project.

As first project activity, delegates of the Egyptian partner universities and of the Egyptian Ministry of Higher Education attended a workshop in Berlin in June 2012 in order to obtain information on equal opportunity policies at Freie Universität and to discuss their applicability to Egyptian circumstances. In the beginning of December 2012, Freie Universität Berlin organized a workshop in cooperation with Cairo University and the Egyptian Ministry for Higher Education in Cairo to discuss different strategies and policies to enhance equal opportunities in higher education in Egypt and Germany.

To raise awareness for the necessity of equal opportunity policies also within the university management, the summer school in Berlin in July 2013 brought together university managers, policy makers, experts in the fields of gender research, and representatives from civil society organizations.

Just recently, the project partners have started to work on a handbook "Guidelines for equal opportunity policies at Egyptian universities" to make the experiences made in the context of the project available for the broader public. The handbook is supposed to be published in autumn 2014. Apart from that, several capacity building workshops will take place at the partner universities in 2014. Furthermore a summer school "gender in teaching" and a network conference with representatives from the five partner universities, other universities in the Arab region, civil society organizations and state institutions are planned

Describe if the project ensured its sustainability

In June 2012 the Egyptian project teams started to establish Equal Opportunity Centres at their universities. The centers mainly aim at supporting all university members in achieving work-life balance and in career development. This includes counseling of young researchers and graduates, offering soft skills courses, and promoting a family friendly environment at the university.

These centres are the tool that will ensure the continuation of the project, after the official project cycle finishes, together with the funding resources.

So far, the project hasn’t been replicated, although its outcomes have been well promoted in various countries.

The project is funded with more than 225.000 Euro within the framework of the DAAD program "Cooperation with the Transformation Countries Egypt and Tunisia" and covers mobility in the context of fact finding missions, workshops, mentoring, as well as training and support for the development of electronic communication and learning environments. In the mid- to long-term perspective, the continuous exchange of knowledge and experiences is expected to contribute to the process of transformation at Egyptian universities.

Experts from both Germany and Egypt were engaged in the project, which ensured both provision of expertise as well as proper understand of the context in which the project was implemented.

In order to maintain the activities of the project after the end of its cycle, all universities are providing staff time in order to ensure that the Equal Opportunity Centres are functioning properly.

Currently, we can say that the awareness raising is being very successful and the project is able to involve many people in its activities.

Girls’ day at South Valley University in December aimed at encouraging school girls to decide in favour of a qualified degree in fields that are presently not typically female, as for example engineering or physics. Furthermore a female students' group will be established starting from spring 2014 to provide female students with a platform for exchange of experiences. The university council has also decided to establish a kindergarten on campus which will be open to children of all university members and therefore is an important step towards achieving work-life balance, not only but especially for female faculty at South Valley University.

The statistical proofs of the success of rate of the project will only be visible in the next years.

Egypt / Initiated by a German institution